Microsoft introduced the graphical identification and authentication (MSGINA) in Windows 2000 and was available till including Windows Server 2003. MSGINA provides secure authentication and interactive logon services. It also provides customization through replacement of the file msgina.dll in the system directory.

After Windows XP was released I got a job to develop such a replacement for this msgina.dll. My first action was to study, which functions are exported. When I took a look into the DLL resources I read the text: The computer got very poorly and decided to end it's own suffering. This text was located in the dialog resource with ID 2210.

I tried to enable the Shutdown Event Tracker in Windows XP Professional, by following a description provided by Microsoft Support. However, this dialog did not appear. Therefore, I wrote a small program which only loads the msgina.dll as a data module and calls the DialogBox function to show dialog with ID 2210. The program, together with source and DLL, are available for download at the bottom of this post. 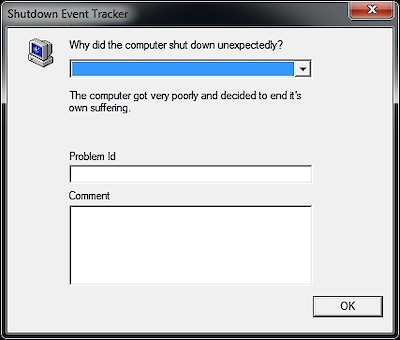 The text in the German version of this DLL sounds also funny: Der Computer ist verarmt und entschied daher, in die ewigen Jagdgründe einzugehen. Translated to English it means: The computer got very poorly and decided to go into the eternal hunting grounds. 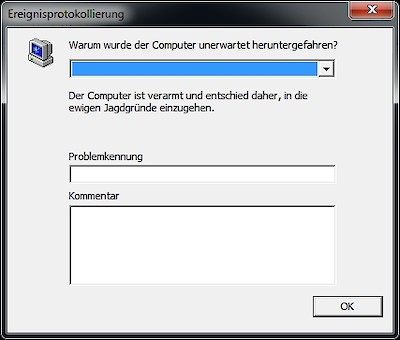 I'm not sure if this text exists also in language versions of this DLL other than English and German. I also inspected the same DLL shipped with Windows Server 2003. But this text don't exist there. The download below contains the program with source code as well as the msgina.dll in English and German for testing on Windows other than Windows XP Professional.